Find us on social media:

This breed will make a great companion for an owner who plans to spend a lot of time with his dog and wants a close companion. He is not a good choice for a pet that will receive little or no attention. He is a strong, determined and intelligent animal. If left to his own amusement and untrained a bored Amstaff can do great damage to house or yard and can be hard to keep fenced. He may not be allowed to run loose because he will get into much trouble. Be sure that you are ready to devote the time and energy to this dog that it requires. This dog demands and thrives on a great deal of attention. Your relationship will benefit greatly from obedience training your dog. Due to his inquisitive intelligence and great strength for his size, this breed may require a more secure environment than some other breeds. If in doubt ask your breeder for advice.

Because of anti-dog legislation in recent years, it would be wise to check the county or municipalities in which you will live with this dog to make sure there are no laws or ordinances prohibiting ownership or limiting the maintenance of this breed. The life expectancy of this breed may be 12 – 16 years with good care. Take this into consideration when Purchasing a dog. Generally, health of an Am Staff is good, and the dogs have exceptionally strong constitutions.

Never purchase an Am Staff from a pet retailer. Buy from a breeder. Contact reputable breeders by attending dog shows, asking at your local dog clubs, reading breed or all-breed dog magazines. Visit more than one breeder if possible and compare their dogs rather than buying the first puppy you find. The right dog will be with you for a long time. Consider an adult or rescued dog – they may make a fine pet and are often available.

Origins of the American Staffordshire Terrier

To correctly give the origin and history of the American Staffordshire Terrier, it is necessary to comment briefly on two other dogs, namely the Bulldog and the Terrier.
Until the early part of the 19th century; the Bulldog was bred with great care in England for the purpose of baiting bulls. The Bulldog of that day was vastly different from our present-day British Bulldog. Pictures from as late as 1870 represent the Bulldog as agile and as standing straight on his legs-his front legs in particular. In some cases he was even possessed of a muzzle, and long rat tails were not uncommon. The Bulldog of that day, with the exception of the head, looked more like the present-day American Staffordshire Terrier than like the present-day British Bulldog.
Some writers contend it was the white English Terrier, or the Black-and-Tan Terrier, that was used as a cross with the Bulldog to perfect the Staffordshire Terrier. It seems easier to believe that any game terrier, such as the Fox Terrier of the early 1800s, was used in this cross, since some of the foremost authorities on dogs of that time state that the Black-and-Tan and the white English Terrier were none too game, but these same authorities go on to stress the gameness of the Fox Terrier. It is reasonable to believe that breeders who were attempting to perfect a dog that would combine the spirit and agility of the terrier with the courage and tenacity of the Bulldog, would not use a terrier that was not game. In analyzing the three above-mentioned terriers at that time, we find that there was not a great deal of difference in body conformation, the greatest differences being in color, aggressiveness, and spirit. Early in the mid-1800s the “Bull and Terrier” breeds were developed to satisfy the needs for vermin control and animal-based blood sports. The “Bull and Terriers” were based on the Old English Bulldog (now extinct) and one or more of Old English Terrier and “Black and Tan Terrier”, now known as Manchester Terrier. This new breed combined the speed and dexterity of lightly built terriers with the dour tenacity of the Bulldog, which was a poor performer in most combat situations, having been bred almost exclusively for killing bulls and bears tied to a post. Due to the lack of breed standards – breeding was for performance, not appearance – the “Bull and Terrier” eventually divided into the ancestors of “Bull Terriers” and “Staffordshire Bull Terriers”, both smaller and easier to handle than the progenitor.
In the 1860s, James Hinks of Birmingham started breeding “Bull and Terriers” with “English White Terriers” (now extinct), looking for a cleaner appearance with better legs and nicer head. In 1862, Hinks entered a bitch called “Puss” sired by his white Bulldog called “Madman” into the Bull Terrier Class at the dog show held at the Cremorne Gardens in Chelsea. Originally known as the “Hinks Breed” and “The White Cavalier”, these dogs did not yet have the now-familiar “egg face”, but kept the stop in the skull profile.
In any event, it was the cross between the Bulldog and the Terrier that resulted in the Staffordshire Terrier, which was originally called the Bull-and-Terrier Dog, Half and Half, and at times Pit Dog or Pit Builterrier. Later, it assumed the name in England as Staffordshire Bull Terrier.
These dogs began to find their way into America as early as 1870, where they became known as Pit Dog, Pit Bull Terrier, later American Bull Terrier, and still later as Yankee Terrier. All American Staffordshire Terrier’s can trace their pedigrees back to English and Irish imports, especially those imported by John P. Colby.
In 1898 the United Kennel Club (UKC) was formed with the express intent of providing registration and fighting guidelines for the now officially-named American Pit Bull Terrier. One of the founders, C. Z. Bennett assigned the UKC registration number 1 to his own APBT, Bennett’s Ring in 1898. From that moment on, cross breeding was no longer accepted. Later, those who wished to distance themselves from the fighting aspect of the breed petitioned the American Kennel Club (AKC) for recognition of the American Pit Bull Terrier so that it would be eligible for dog shows and other performance events. The AKC conceded on the 10th of June, 1936, but only under the stipulation that the dogs registered with them be called “Staffordshire Terriers”, the name of the province in England in which the breed supposedly originated.
Upon acceptance of the breed, many people dual-registered their dogs with both the AKC and the UKC. PR Lucenay’s Peter the dog that starred in the Our Gang series was the first dual-registered American Pit Bull Terrier/Staffordshire Terrier. With this purportedly newly created breed, the AKC required a breed standard. After visiting a few kennels, a committee headed by Wilfred T. Brandon chose Colby’s Primo as a standard for the “Staffordshire Terrier”. Colby’s Primo was whelped on May the 29th, 1935. His sire was: Colby’s Brandy and his dam: Colby’s Mable. Primo was registered with the AKC 641-443, the UKC 233-460 and the ADBA 500-01.

champion, which was the great grandsire of AKC champion Ruffian Black Beauty of Harwyn.

The only other legitimate recognized history of the American Pit Bull Terrier and American Staffordshire Terrier, besides a Bull and Terrier cross, is that they are pure old original Bulldogs. Many paintings depict these old original Bulldogs as pure Bulldogs, with no cross-breeding between Terriers. There is a noticeable similarity to American Pit Bull Terrier’s.
This alternative version of history, is that they originated from Spanish Alanos dogs which were the original old time Bulldog. It is said that the English imported many of these Spanish Bulldogs from Spain, as they realized their value as a working dog.
Later when English and Irish immigrants (due to the potato famine) migrated to the united states of America, they brought their trusted Bulldogs with them. Some believe breeders kept the dogs pure and did not cross them with Terriers even though they may have originally been crossed with the English White Terrier or Black and Tan Terrier. 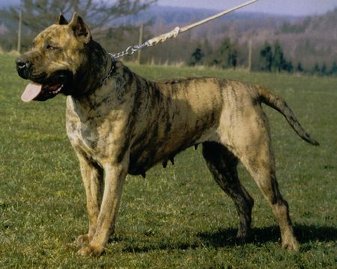 The Alano (or its ancestors) are said to be the ancestors of several breeds including the Ca De Bou and the Cordoba Fighting dog used as one part of the Dogo Argentino. It is possible that the English and/or Irish crossed their Spanish Bulldogs and others did not, so both might be true. The Spanish Alano and correct bred American Pit Bull Terrier resemble each other a lot.

The History of Blue Dogs in APBT’s and AmStaff’s – By Jack Turner :